Current 10% OFF Sale and Free Shipping on US Orders of $150 and more. And we always refund Shipping Overcharges.

Check out this Article about our ETSY Team!!! 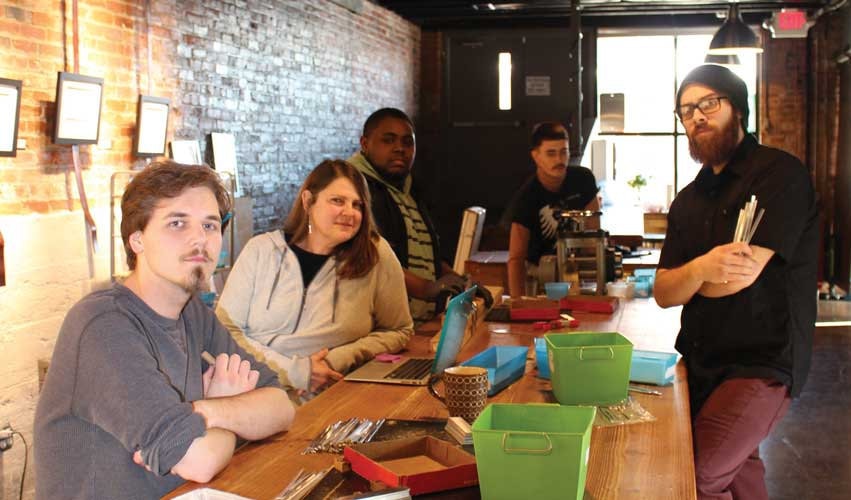 An Ear for Art & Business

Lizz Barnes has built a shop, a studio, and a supportive community for artists.Mention the words “Ear in the Envelope” to someone, and the reaction generally falls into one of two categories. In many cases, a look of confusion—followed by a smile—falls over the person’s face. “What does that mean?” Others may react with excitement, recalling a First Friday visit to the Ear in the Envelope studio, where they enjoyed original artwork and music.The name is unusual, and it is a First Friday venue—but Ear in the Envelope is much more than that. It’s the home of the third-largest Etsy store in Illinois, a destination for community events, and a workplace where numerous Peoria artists and creatives make their living. It is also the unexpected dream-come-true of artist and business owner Lizz Barnes.

A Business is Born As an undergraduate student, Barnes faced a difficult career decision: pursuing art primarily as a teacher or as a creator. “I went to school for art education,” she explains. “But then I took a glassblowing class and fell in love with the studio experience.” After graduating, she accepted a position as a private art teacher at an elementary school in the Chicago area, yet the studio still beckoned. Though she could not afford to set up a professional studio, she purchased a torch and began creating glass beads—and felt an immediate connection.Barnes experimented with other techniques as well, including wire wrapping and precious metal clay, or PMC; then she started working with glass fabrication and soldering. “And that was it—I realized that fabrication was my thing,” she explains. “I love building and putting things together.” She started selling her work in the Chicago area and was able to generate an income that helped support her family. As her glasswork expanded, she realized that her future lay outside of the classroom. “It confirmed that I am really more of a maker than a teacher, but I still love both.”But just as Barnes began to feel like she had a handle on her career path, the strands that held together years of work seemed to unravel. The first blow came when her husband, Tim, was offered a job in Peoria. Though happy for him, it meant losing the client base she had built in Chicago. The second blow was more difficult—she was diagnosed with rheumatoid arthritis. Barnes, now living in Peoria, felt discouraged. “I wondered if I would ever be able to make jewelry again,” she confesses.Anticipating another career shift, she decided to sell some of her supplies on Etsy, the worldwide online marketplace for unique goods. As other artists spotted the deal on her high-quality supplies, they sold immediately. “I thought, This is cool!,” Barnes smiles. “I couldn’t believe people were buying my junk!”It was around this time that she met and befriended a neighborhood family. One of their children wanted to learn metal stamping, and Barnes jumped at the opportunity to teach him. She turned to Etsy to find metal blanks—and realized her only option was to purchase expensive sterling silver. “No one was selling blanks for metal stamping!” she recalls.Undeterred—and sensing a business opportunity—Barnes realized that if she could purchase small quantities of aluminum metal, she could determine which grades would work best for creating metal blanks. She began contacting metal production facilities, but her requests were summarily ignored. “It’s the weirdest thing,” she reflects. “I started calling these guys and no one was responding. You almost feel like you’re a big joke.”Out of curiosity, she tried once more—this time posing as “Joe,” who was “looking for some metal to make sculptural fountains.” The trick worked.“I had so many email replies!” Barnes notes incredulously. “I was finally able to find people who were willing to sell me smaller amounts of metal.” Next she purchased some metal shearing equipment, and within a month her small Etsy shop was inundated with orders. “That is not normal,” she adds. “But at the time there was a giant hole in the market… and I was there at the right time.”Seeking a name for her new venture, she found one in a legend about her favorite artist, Vincent van Gogh, who allegedly cut off his earlobe, put it in an envelope and gave it to a prostitute. “I thought, ‘What a cool name for a business!’ And people never forget it.”

Studio Teamwork Barnes’ part-time Etsy shop quickly turned into a full-time job. After just three months, she hired her first three employees—turning to her nephew, Aaron Austin, to help her assemble the right team. Austin, a musician, recommended a friend of his, Clint Kehlert. “Clint is also a musician, and I think that’s why he knew how to work with a team,” she explains. “Once I met Clint, I wanted more Clints.”The small, but growing team worked out of her basement for two years before moving to their current space in Peoria’s Warehouse District. “That’s where I became more connected with the art community, which was really exciting.” Barnes started opening up the studio on First Fridays and featuring local artists and musicians in their gallery space. This gave her a chance to demonstrate metal stamping to area residents—most of whom were not familiar with her emerging business.It is still a challenge to obtain the high-quality metal used to create the supplies they offer artists, Barnes says. “We sometimes have to move from company to company because they stop carrying it.” When it arrives, however, her team takes over.“We have three shears in our studio now—we started out with one that looked more like a paper cutter,” she laughs. “We can then cut it down into sizes we can manage and create pieces that are the size and width of a bracelet, a ring, or necklace charms.” Once cut to size, the pieces are placed in tumblers to give them a smooth finish; then they are packaged and shipped to customers.With nearly 26,000 customer reviews, Barnes’ team has managed to maintain a five-star rating on Etsy. “Although we’re the third-largest Etsy shop in Illinois, it seems like we are everyone’s favorite blank supplier,” she says. An artist herself, Barnes is very picky about what she sells to others. She knows exactly where their metals come from—and orders can be customized based on the client. “We respond to what the customer wants.”

The Mentoring Connection What also makes Ear in the Envelope unique is Barnes’ desire to cultivate a workplace culture where her employees truly feel supported. “It’s been a real gift to get people who are perfect for their jobs,” she explains. “I don’t know if it’s the mom in me or that mentor in me, but I just want to see them do something better. I am so glad they are with me… but I also know that [they] are talented.”To that end, she encourages them to talk about their own career goals and artistic pursuits, and makes space at the studio available to them whenever possible. She speaks with enthusiasm, explaining why each is perfect for what they do—and they are loyal in return. Over the years, Barnes says she’s only had about 10 different employees.Though she never had a specific mentor on her own artistic career journey, she values the help she received along the way, and wants to do the same for others. “Connecting people has always been a big thing for me,” she explains. As the business has grown, Barnes’ approach to her own artwork has shifted. She still creates jewelry, but she takes a far more relaxed approach these days. “I’ve moved on from surviving on jewelry sales,” she says. “Jewelry is about creating my ‘Zen moment’ now.”In the year ahead, she hopes her team continues to adjust to the evolving demands of their clientele. They are also working to finalize their featured artists for First Fridays. Meanwhile, Barnes continues to make her space available to artists, including the Emerging Artists Collective, a recently formed group that works to encourage opportunities for Peoria-area artists. “A city that values the arts values its people,” she declares.Though she jokes of traveling to Ireland and starting up a shop in Galway, there’s no place she’d rather be than here in Peoria, running Ear in the Envelope. “I just love this work,” Barnes says. “I am really happy with where it is.” a&sMeet the team! Lizz Barnes’ team at Ear in the Envelope includes four full-time employees—and each is talented in their own right. art & society - mar/apr 2018